In this series, I’m going to document and explore my journey through my last hosting and development trials for 2015-2016.

At the beginning on 2015, I had been hosting my websites on AWS for about a year. Doing so, however, was feeling a bit too expensive hitting about $150/month. So, mid 2015, I started moving all my websites into my house. I setup a basic server, got a decent ISP connection, added a CDN in front of my sites, and stopped paying AWS.

Overall this worked – however, I had moved to what was, previously, my media server machine. While acceptable for video playback (i3 core (4t), 8gb of ram, and some spinning disks), the server was clearly struggling at times with VMWare and several virtual machines sitting on top of it.

I eventually got my hands on some obscenely powerful datacenter-grade hardware, set it all up – and then got my first power bill. Paying $70/month to run that beastly 2u server just wasn’t going to fly, plus it had to be in the garage because of how dang loud it was.

Whether it was the underpowered media machine, or the power house server, both situations left me with a single point of failure – I wanted redundancy and low power.

To work around expensive power costs, and to scratch my own continued-learning-education itch, I decided to have a go at creating a mini-cluster. I started putting together a plan for a small cluster of machines: cheap, low power, low noise, and capable enough to run my websites. By specifically targeting a “cluster” (3+ machines) I would achieve a high level of redundancy – meaning I wanted to be able to turn off (on purpose or accidentally) a machine and not have any websites go offline without manual intervention to get them back.

When you think, “small efficient computer” you should probably jump right to Raspberry Pi. What that team has accomplished is nothing short of amazing. I bought two different models of these to try them out, but ultimately didn’t settle on them as a platform.

While there is a lot of maturity in the RPI platform, and the power/noise factors are amazing, having to constantly deal with software availability and ARM compilation just wasn’t worth the trouble.

Knowing that I wanted to stay pretty mainstream, I came back to the X86 (Intel and AMD) camp. Looking around I generally found that the Intel processors combined with related components had a hard time pricing out to less than $500 for a small box. Turning to the AMD camp I found an amazingly cheap, low power, and mid-performance chip call the AM1. With 4 cores @ 2ghz and sub $50 it’s right where I wanted. More importantly, the price point for the components around it are quite low:

Overall, I spent about ~$210 per machine, add in a $25 switch and some cables and I had a small cluster for around $700. I already had hard drives, SSDs infact, from other builds.

All put together with a bit of wood stain and hung up: 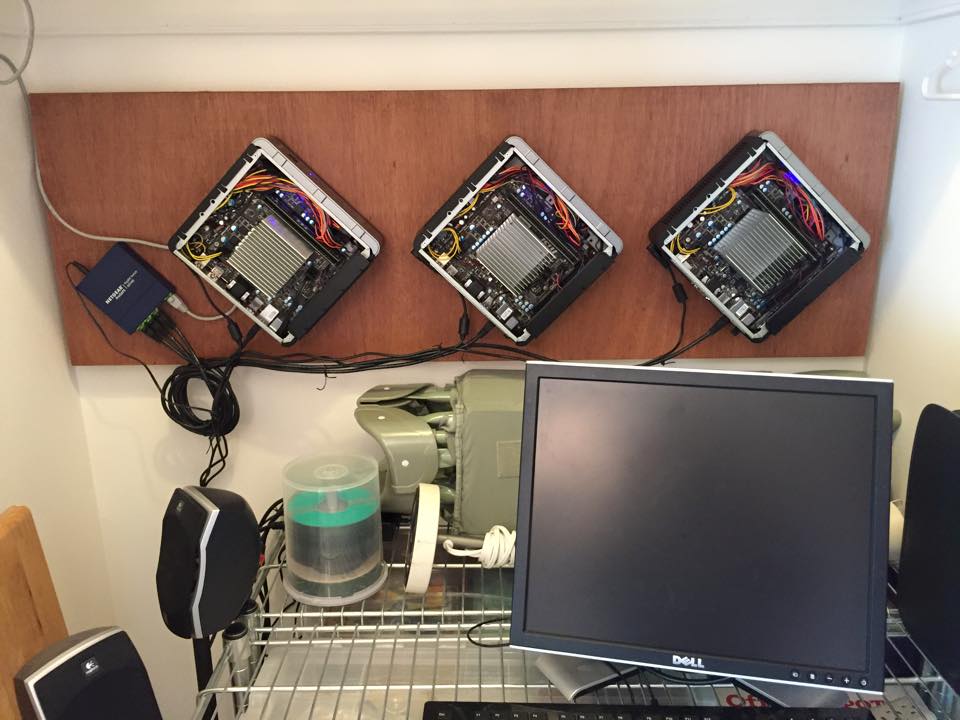 Now I’ve got three identical machines. I’m ready to start getting my cluster up and running.